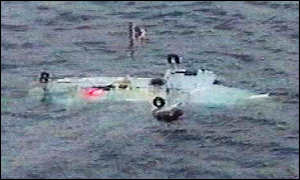 Investigations are underway into crashes involving Merlin helicopter and Jaguar
jet, as reported by BBC.

The Merlin air support chopper crashed into the sea off the coast of Scotland.
It was conducting trials on the new generation sonar when engine failure occurred.

One hour later Jaguar fighter-bomber jet hit a flock of seagulls and lost power
in both engines soon after.

No fatalities were reported. Five pilots of the Merlin and one Jaguar commander
ejected to safety.

The new generation Merlin choppers is the pride of RAF. It entered service in
1999 and cost of each is estimated to be around 40-50m of pounds. 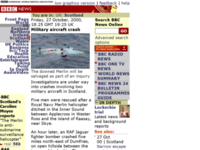 Five people are rescued after a Royal Navy helicopter ditches in the sea and an RAF jet comes down near Lockerbie. // news.bbc.co.uk