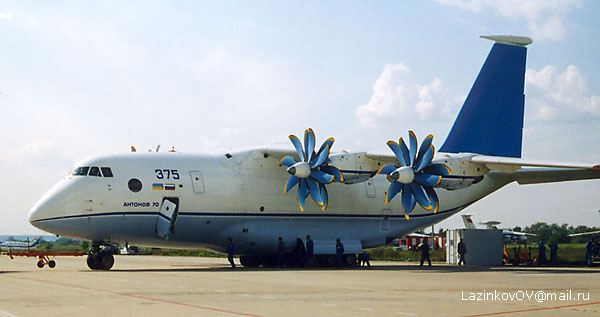 KIEV, 18 OCTOBER-2000. /ITAR-TASS/. During the ongoing testing program of the AN-70 freighter, fascinating performance characteristics have been acheived. The AN-70 became the only airplane of its kind capable of maintaining stable flight at speeds as low as 98km/h(!!!). According to OKB Antonov media service, for the first time in history of aviation, a 120-ton monster airship conquered speeds acheivable previously only on ultra-light planes. Joint Russian-Ukrainian pilot teams reached astonishing AOA of 30 degrees which is accessible only to highly advanced fighter jets of today. Also, immitated engine-failure never resulted in stalling/spinning etc.
The AOA test results indicate that the aircraft remains manually conrolable under most extreme conditions and therefore is completely safe in all flight modes and completely satisfy National standards for new-generation airlift.