The American space agency, Nasa, has begun landing a spacecraft on an asteroid.

Mission controllers have fired motors on the probe to begin an historic descent towards the surface of Eros.

If all goes well, the probe will land on the giant space rock at 1904 GMT.

Scientists say that if the landing is successful it will provide them with information which could one day help them deflect
asteroids heading towards the Earth.

The Near Earth Asteroid Rendezvous (Near) craft is attempting to alight on the surface of rocky Eros, millions of miles from the
Earth.

Near has been orbiting the 21-mile-long rocky boulder for about a year, finding out about its geology. Eros has a 5% chance of
hitting our planet, but not for another 100 million years or so.

Dr Louise Prockter, a scientist working on the mission, told the BBC: "Prior to going into orbit around Eros, we weren't sure
what asteroids were composed of - whether they were solid lumps of rock or whether they were rubble piles just held together
loosely by gravity.

"What we know about Eros and other asteroids like it now is that they're actually fairly solid but they've got a lot of gaps and
crevasses inside them.

"Although we're far from being technologically ready to blow one out of the way if it comes too close, forewarned is forearmed
and we have an idea of what we're up against if that ever happens," she said.

Scientists plan to broadcast images from the space probe on the internet as it drifts down towards the asteroid's surface and
tries to land at about three miles an hour.

Mission director Dr Robert Farquhar of the John Hopkins University Applied Physics Lab said: "It's never been tried before
and it certainly is a complicated set of manoeuvres, but at this point the only real risk is not taking one.


"The whole sequence of engine burns has to go right, or it might not be a very soft touchdown.

"The unknown nature of the surface makes it hard to predict what will happen to the spacecraft, especially since it wasn't
designed to land.

"The most we can hope for is a beacon from Near Shoemaker that says it's still operating."

The craft is not actually designed to land - the manoeuvre is only being attempted because it is close to the end of its useful life.

The encounter will take place 316 million km (196 million miles) away, just beyond the orbit of Mars.

Because the spacecraft will be using its thrusters to hover for about an hour while it scouts the surface, there is the possibility
that it may exhaust its fuel supply.

It will aim for the edge of a protruding region of Eros known as Himeros, near the boundary of two different types of terrain.

Eros is important because it is made of material left over from the birth of the Solar System and the planets some 4.5 billion
years ago.

It belongs to a rogue population of asteroids, one of which is believed to have wiped out the dinosaurs 67 million years ago.

When Near nudges Eros it will be only the fifth object to be touched since the start of the space age, after the Moon, Mars,
Venus and Jupiter. 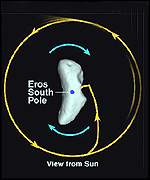