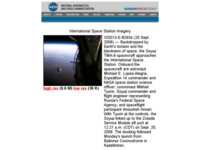 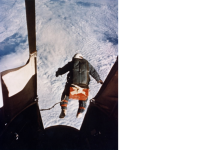 Excelsior III launched on Aug. 16, 1960. Joe probably shouldn't have done it-he lost pressure in his right glove, causing extreme pain from the blood pooling in his hand. But he didn't feel that was enough to cancell the mission, so he went ahead. Excelsior III kept climbing until it reached 102,800 ft-the highest altitude yet reached by a manned balloon. But Joe wasn't finished.

Outside, the temperature was -100 deg. F. Joe Kittinger stood on the edge of the gondola, looking down at the New Mexico desert 20 miles below, and said, "Lord, take care of me now...."