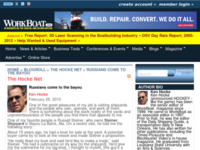 The Hocke Net - Russians come to the bayou - WorkBoat.com

Russians come to the bayou One of the great pleasures of my job is visiting shipyards and the people who own, operate, and work at them. There is something about the stark reality of the yards and unpretentiousness of the people you find there that appeals to me. One of my favorite people is Russell Steiner, who owns Steiner Shipyard in Bayou La Batre, Ala. On a recent visit, he told me the following story: About 15 years ago, he had a boat for sale at the yard. A potential buyer came by to look at the vessel and made Steiner a proposition. // Дальше — www.workboat.com
Прикреплённые файлы: Want to set your local edition? Select an edition for focused news coverage when you visit AL.com. Don't worry. You can change this setting at any time to another local edition. MOBILE, Alabama — World-renowned filmmaker Mike deGruy died Saturday at age 60 in a fiery helicopter crash shortly after taking off from an airport in Australia.  A Mobile native, deGruy was best known for his work filming the wreck of the Titanic with director James Cameron and for his Emmy-award winning camerawork for the BBC series "The Blue Planet." He filmed everything from killer whales leaping from the water to snatch baby seals to boiling thermal vents more than a mile underwater. // Дальше — blog.al.com

"During one of his last visits to Mobile, the Press-Register accompanied deGruy to Steiner Shipyard in Bayou la Batre to take a look at a Soviet deepwater submarine that has been marooned there since the 1990s, shortly after the collapse of the Soviet Union. He had learned of the Cold War-era spy sub from a Press-Register reporter and was considering buying it along with James Cameron" 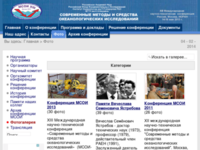 The NR-1 mini submarine being dismantled. It is on the purpose built barge for the NR-1... This Nuclear Research Submarine was nicknamed 'Nerwin' (NR-1 = Nerwin). She was never "officially" accepted by the US Navy to keep her classification secret. Take a look at the name on the purpose built barge she is resting on. en.wikipedia.org/wiki/NR-1_Deep_Submergence_Craft bigstory.ap.org/article/submarine-its-sailors-maintain-co... en.wikipedia.org/wiki/MV_Carolyn_Chouest © 2013 Paul Carter All Rights Reserved Please ask before you use my photos // www.flickr.com
Прикреплённые файлы:

"...Life aboard the Navy’s top secret Cold War submarine: The disassembled NR-1 vessel is brought back to life for exhibition on its dangerous missions..."

NR-1 served during the Cold War, when crew members his details even from their wives. Now its secrets are finally revealed at an exhibition in Groton, Connecticut. // www.dailymail.co.uk 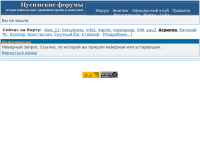