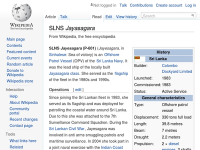 SLNS Jayesagara (P-601) (Jayesagara, in Sinhalese: Sea of victory) is an Offshore Patrol Vessel (OPV) of the Sri Lanka Navy. It was the lead ship of the locally built Jayasagara class. She served as the flagship of the fleet in the 1980s and 1990s. Since joining the Sri Lankan fleet in 1983, she served as its flagship and was deployed for patrolling the coastal water around Sri Lanka. Due to this she was attached to the 7th Surveillance Command Squadron. During the Sri Lankan Civil War, Jayesagara was involved in anti arms smuggling patrols and maritime surveillance. // Дальше — en.wikipedia.org