January 2016, Blue announced that they intended to begin testing full engines of the BE-4 on ground test stands prior to the mid-end of 2016. 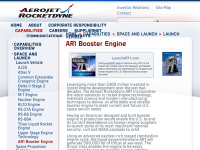 Leveraging more than $300 million invested in rocket engine development over the last two decades, the Aerojet Rocketdyne AR1 incorporates the latest advances in rocket engine technology, materials science and modern manufacturing techniques to deliver an affordable and reliable booster engine to meet current and future U.S. space launch needs. Having an American-designed and built booster engine in production would enable the U.S. to end its current dependence on foreign engine suppliers to launch some of its most important national security, civil and NASA payloads to orbit. // Дальше — www.rocket.com

...
Orbital ATK ordered RD-181 engines from Russia’s NPO Energomash, the builder of the Atlas 5 rocket’s RD-180 engine, in the wake of a catastrophic launch failure moments after a liftoff from Virginia in October 2014. The Antares rocket crashed near the Antares launch pad, toppling two of the facility’s lightning protection towers and carving a huge crater just northeast of pad 0A’s elevated launch mount.

A commercial Cygnus cargo freighter en route to the International Space Station with supplies was destroyed in the failure.

Investigators from Orbital ATK and NASA concluded the fiery mishap started about 15 seconds after liftoff inside a liquid oxygen turbopump on one of the rocket’s first stage AJ26 engines.

The engines were built more than 40 years ago by the Soviet Union’s Kuznetsov Design Bureau for the N1 moon rocket. When the Soviet moon program was canceled, officials put the engines — called NK-33s in Russia — in long-term storage before Aerojet Rocketdyne imported the powerplants to the United States in the 1990s.

Aerojet Rocketdyne modified the engines for use on U.S. launchers, qualifying the NK-33s for U.S. propellants and adding mechanisms for in-flight steering. The company renamed the upgraded engines as AJ26s.

Orbital ATK intended to move away from the AJ26 engine before the 2014 launch failure, but the accident accelerated the company’s plans. Officials announced two months after the rocket crash that NPO Energomash would provide newly-built RD-181 engines for future Antares launches.

Since the first two RD-181 engines arrived from Russia last year, ground crews at Wallops have mated the powerplants to the Antares rocket’s Ukrainian-made first stage structure. The booster and RD-181 engines set for the hotfire test later this month are assigned to fly on the OA-7 launch scheduled at the end of 2016.

The RD-181 engine generates 13 percent more thrust than the AJ26 and burns its mix of kerosene and liquid oxygen propellants more efficiently, Eberly said in an interview with Spaceflight Now. “The combination of those two (improvements) give us a good 20 to 25 percent performance improvement to the orbit that we’re flying to in low Earth orbit to inject the Cygnus for these cargo runs,” Eberly said.

The single-chamber RD-181 is similar to the dual-nozzle RD-180 engine flown on United Launch Alliance’s Atlas 5, producing about the thrust of its larger cousin. NPO Energomash produces a nearly identical engine named the RD-191 for Russia’s Angara rocket family.

The new version of the rocket is known as the Antares 230 configuration, according to Orbital ATK.

Eberly said the new engines required a new type of thrust adapter, a structural component that mechanically connects the RD-181s to the first stage. Orbital ATK also built avionics systems for the engines, developing the new controllers in-house to replace the AJ26 controller sourced from an external supplier, Eberly said.

“It’s about the same physical size as the AJ26,” Eberly said. “It uses the same propellants. The combustion cycle (is the same), which means that the mixture ratio between the two propellants — between the kerosene and the liquid oxygen — is very close.”

Each engine is individually steered to guide the Antares rocket in flight, and designers positioned the RD-181 engine nozzles in the same place as the AJ26 engine cones, minimizing changes to the launch pad and ground support equipment.

“The new components were the engines, obviously, the new thrust adapter, and then feedlines, which are the pipes that connect the core tanks to the engines, and then some new avionics and software to control it all,” Eberly said. “That was really what changed. Everything forward of the first stage is identical.”
...
The higher-performing RD-181 engines will alter the Antares rocket’s launch profile, Eberly said. Because the new engines will consume fuel from the same first stage tanks first designed for the AJ26, they will drain the propellant supply faster.

“Whereas with the AJ26, we were on the order of 235 seconds of first stage burn, we’ll be down around 214 seconds for these RD-181s,” Eberly said. “They will just consume the propellants that much faster.”

Adam Williams > So despite the numbering, the RD-181 is vastly different than the RD-180. It has 1 nozzle for 1 turbopump & makes about 1/2 the thrust of the RD-180. The idea of a shared turbopump with multiple nozzles seems to have come & gone.

Mario Billiani> The RD-181 is actually just the export variant of the Russian RD-191 engine used on the Angara rocket. The RD-191 and the RD-180 are both derivatives of the RD-170 used on the Soviet Energia launcher, which is the most powerful liquid fuel rocket engine ever flown.
The RD-170 features one single shaft turbopump for four combustion chambers, whereas the RD-180 has one turbopump for two combustion chambers and the RD-191 one on one respectively.

"Eberly said the new engines required a new type of thrust adapter, a structural component that mechanically connects the RD-181s to the first stage. Orbital ATK also built avionics systems for the engines, developing the new controllers in-house to replace the AJ26 controller sourced from an external supplier (...)
“The new components were the engines, obviously, the new thrust adapter, and then feedlines, which are the pipes that connect the core tanks to the engines, and then some new avionics and software to control it all,” Eberly said. "