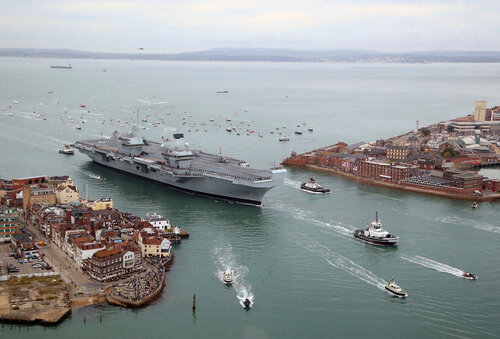 Britain's new flagship HMS Queen Elizabeth arrives in Portsmouth, Britain, Wednesday Aug. 16, 2017. HMS Queen Elizabeth has arrived at its home port in southern England to great fanfare. Crowds lined the harbor on Wednesday to welcome the ship to Portsmouth Naval Base, where the 919-foot (280-meter) vessel will be based for its estimated 50-year lifespan.(Gareth Fuller/PA via AP) 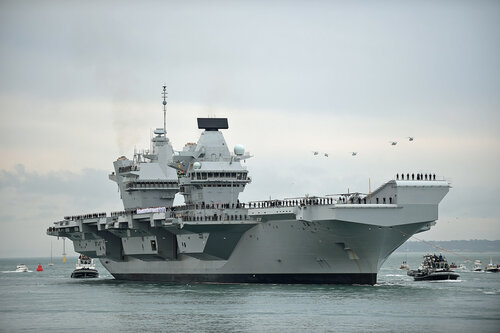 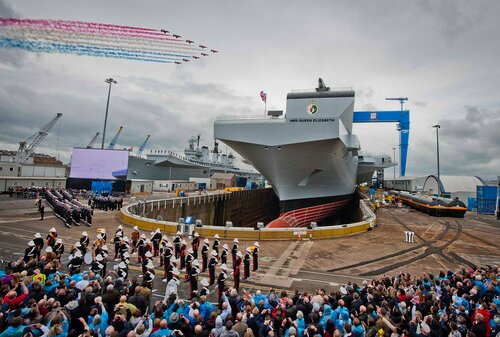 Rosyth, SCOTLAND - JULY 03: Red Arrows mark the naming of Royal Navy's new aircraft carrier HMS Queen Elizabeth by Queen Elizabeth II on July 4, 2014 in Rosyth, Scotland. HMS Queen Elizabeth is the largest warship ever built in the UK weighing 65,000-tonnes, six shipyards around the UK have been involved in building various parts of the carrier. The ship is capable of carrying up to forty aircraft, is scheduled to be launched later this summer, and to commission in early 2017, with full operational capability from 2020. (Photo by Chris Watt/Getty Images) 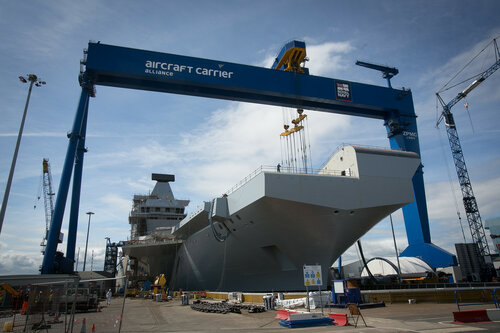 ROSYTH, SCOTLAND - JUNE 17: Construction continues on the HMS Queen Elizabeth aircraft carrier being built in Rosyth Dockyard on June 17, 2014 in Rosyth, Scotland. In a few weeks HMS Queen Elizabeth, the lead ship of the Queen Elizabeth-class of aircraft carrier and the largest warships ever built for the Royal Navy, will be named named by her namesake the Queen in a traditional champagne ceremony. The ship, capable of carrying up to forty aircraft, is scheduled to be launched this summer, and to commission in early 2017, with full operational capability from 2020. (Photo by Matt Cardy/Getty Images)

'Queen welcomes Royal Navy's largest ever ship into the Fleet'

Her Majesty The Queen has commissioned the UK's new aircraft carrier HMS Queen Elizabeth into the Royal Navy's fleet. //  www.royalnavy.mod.uk

A handout photo made available by MOD shows the HMS Queen Elizabeth, the first QE Class aircraft carrier, awaiting low tide before departing from Rosyth, Scotland, 26 June 2017. The Royal Navy's new aircraft carrier will commence first stage sea trials off the north east coast of Scotland. Three years after she was officially named by Her Majesty Queen Elizabeth II, the Nation?s future flagship will spend an initial period of around six weeks at sea to test the fundamentals of the ship. The sea trials will monitor speed, manoeuvrability, power and propulsion as well as undertaking weapons trials and additional tests on her levels of readiness. She will transit to her homeport of Portsmouth Naval Base to be handed over to the Royal Navy later this year. EPA/Andrew Linnett HANDOUT HANDOUT EDITORIAL USE ONLY/NO SALES

HMS PRINCE OF WALES floats out