Specific types of Soviet ICBMs include: DF (Dong Feng or East Wind) are land-based ICBMs. France only deploys submarine-launched ICBMs, with all land based IRBMs decommissioned. North Korea K-5 missile, with a maximum range of 6,000 kilometers and a payload of one tonne, is under development by DRDO which may be the SLBM version of AGNI-VI (ICBM). However, there is strong opacity regarding the existence of such a project. A variant of the K-4 missile is also under development, with a range of 5,000 km and is intended to arm the future, larger nuclear submarines of the Indian Navy. India, having completed the development of its first ballistic missile submarine INS Arihant, is reported to be developing at least three more submarines in the Arihant classi.e total 4 SSBN. // en.wikipedia.org 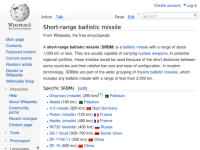