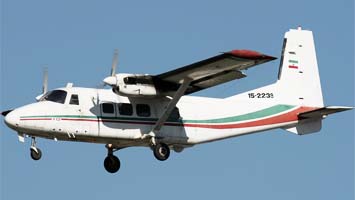 In accordance with the contract signed between China and Canada this wednesday, Harbinsk Aircraft Manufacturing Company will deliver 10 aircraft of Yun-12 type to one of Canadian companies. According to Xinhua, taking into consideration earlier contracts, the China will deliver a total of 16 Yun-12 planes to Canada by the end of 2002.
The Yun-12 aircraft developed by Harbinsk company are mainly designated for performing airlift task and also passenger service. To date, a total of 120 aircraft of the type have been sold. 94 of them were delivered to 20 different countires.
The safety record of the aircraft however is very low. This summer, Yun-12 with 38 passengers and 4 crew members exploded in the air after being hit by lightning - no one survived. In 1997 Mongolian Yun-12 exploded in the air killing 7 out of 12 on board. Same year another Yun-12 crashed in Mongolia killing 28.