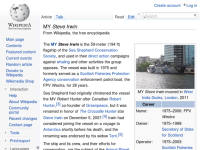 2006–2007: MV Robert Hunter The MY Steve Irwin is the 59-meter (194 ft) flagship of the Sea Shepherd Conservation Society, and used in their direct action campaigns against whaling and other activities the group opposes. The vessel was built in 1975 and formerly served as a Scottish Fisheries Protection Agency conservation enforcement patrol boat, the FPV Westra, for 28 years. Sea Shepherd had originally christened the vessel the MV Robert Hunter after Canadian Robert Hunter, co-founder of Greenpeace, but it was renamed in honor of The Crocodile Hunter star Steve Irwin on December 5, 2007. Irwin had considered joining the vessel on a voyage to Antarctica shortly before his death, and the renaming was endorsed by his widow Terri. The ship and its crew, and their efforts for conservation, are the subject of the Animal Planet show Whale Wars. // Дальше — en.wikipedia.org