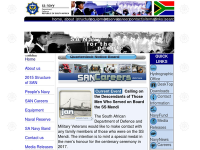 The navy is considered to be in a state of near total disarray. Nevertheless, riverine operations are critical for the DRC due to the country's extensive system of navigable rivers and poor roads. Indeed, the importance of river transport led the government to withdraw all such vessels from the east of the country ahead of the rebel and foreign armies advance in 1998.

The most often used vessels are civilian or merchant river barges that have been converted to military use. These vessels are often armoured and may have machine guns and other heavy weapons mounted upon them. Their most notable actions during the war included the successful relief of Ikela (in association with Zimbabwean special forces) in January 2000, and the disastrous defeat near Libenge on the Ubangi river in August 2000. In the later action an ambush by the rebel Movement for the Liberation of Congo (Mouvement de libération du Congo : MLC) sank one troop carrying barge, and disabled two others. Newspaper accounts reported that some 700 Congolese troops died in the battle, which marked the high point of the government's mid-2000 offensive in Equateur Province.

Zimbabwe Special Forces are thought to have initially trained with Congo's Lake Command in 1998, enabling many covert missions to occur on Lake Tanganyika in the early stages of the war. Again, it is unclear if Congolese boats or reported but unconfirmed United States supplied/sourced Raiders were used by the Zimbabweans in these missions. Late 2000 reports revealed that a shipment of Zimbabwean manufactured patrol boats were delivered to the Kinshasa-allied Burundian Forces for the Defence of Democracy (Forces pour la defense de démocratie : FDD) by way of Zambian ports on southern lake Tanganyika. Subsequently, a Congolese and Zimbabwean offensive aiming to reopen a corridor to Lake Tanganyika failed in November 2000.

Under the mid-2003 re-organisation of the armed forces, command of the navy was allocated to the former rebel group, the MLC. Chief of the Navy Major-General Dieudonné Amuli Bahigwa was duly appointed in September 2003. His predecessor under the Kabilas, Lieutenant-General Liwanga Maata Nyamunyobo, became armed forces chief of staff at this time. The position of Deputy Chief of Staff of the Navy was to be appointed by the RCD-Goma.

All of the 1,000 personnel are believed to be volunteers; of these, 70 are officers and up to 600 are marines.

The Navy was placed under army command by the new government in 1997 but its independence was re-established under the military unification and restructuring plan of 2003. Coastal command is located at Matadi, riverine command at Kinshasa and lake command at Kalémié on Lake Tanganyika. The latter was under rebel control from late-1998.

There are three commands: Coastal, Riverine, and Lake. With the informal nature of the fleet since the late 1990s, it is unclear how the few remaining vessels have been allocated between bases and commands.

There are believed to be a few Chinese supplied coast launched HY-2 Silkworm surface to surface missiles, almost certainly non-operational.

The navy has made no contributions to UN operations. Revised MONUC deployment plans from February 2001 emphasised the importance of safe transit along the DRC's rivers and lakes for Congolese security by specifying that a 400 strong unit of peacekeepers be delegated for waterborne patrol. Some 240 members of the Uruguayan Navy were subsequently deployed with patrol boat to re-open the River Congo.

Retraining of the Navy is likely to occur alongside the restructuring and training of the unified national armed forces, although it will be of low priority compared to the ground forces. Given the extended period of naval activity, the lack of boats and dearth of expertise by any armed faction in naval operations, the Navy is likely to require virtual recreation from base level.

Theoretically, naval bases are located at:

Boma
Kinshasa (Riverine HQ)
Matadi (Coastal HQ)
The following two bases on Lake Tanganyika were under the control of the RCD-Goma from 1998/99:

Kalémié (former Lake HQ)
Moba
Under these conditions, the Kinshasa government maintained access to Lake Tanganyika only via its FDD garrisoned enclave at Moliro on the Zambian border, which was used to launch infiltration vessels up the lake to Burundi and rebel-occupied South Kivu province.

Most operations in the Congolese conflict have involved unclassified civilian vessels improvised to serve as attack craft or river transports. These are not listed in the navy's official inventory.

Note:
First four delivered from China in 1976-78. All were thought to be beyond repair by 1985 but two of the four were patched up, two replacements were delivered in February 1987 and one more has been recovered since then. New radar and communications fitted in 1990. P 101 sunk at moorings in mid-1990. No lake patrols were reported after the 1997 Kabila victory. One of these craft reported captured by rebels in 1998 and another two were reported deleted the same year. Any remaining vessels were inoperable by 2000 and are unlikely to be revived in the future.