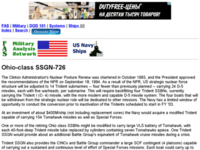 The Clinton Administration's Nuclear Posture Review was chartered in October 1993, and the President approved the recommendations of the NPR on September 18, 1994. As a result of the NPR, US strategic nuclear force structure will be adjusted to 14 Trident submarines — four fewer than previously planned — carrying 24 D-5 missiles, each with five warheads, per submarine. This will require backfitting four Trident SSBNs, currently carrying the Trident I (C- 4) missile, with the more modern and capable D-5 missile system. // Дальше — fas.org

Говоря по-русски - 4 первых лодки в серии.
"Only two things are infinite, the universe and human stupidity, and I'm not sure about the former." ©
Это сообщение редактировалось 21.12.2003 в 00:21

Each SSBN is at sea at least 66 percent of the time, including major overhaul periods of twelve months every nine years. One SSBN combat employment cycle includes a 70-day patrol and 25-day period of transfer of the submarine to the other crew, between-deployment maintenance, and reloading of munitions.

"Only two things are infinite, the universe and human stupidity, and I'm not sure about the former." ©
Это сообщение редактировалось 21.12.2003 в 23:29

Да и по поводу КОН-а, я бы всё таки поискал ещё инфо, повозможности.
"Only two things are infinite, the universe and human stupidity, and I'm not sure about the former." ©

TEXT :
Programmes: Following the 1994 nuclear posture review which recommended a
14-strong SSBN force, remaining four `Ohio' class to be converted to SSGN
role. Conversion contract with General Dynamics Electric Boat in October
2002. Ohio and Florida started mid-life refuelling in 2002. Conversion
work is to start in 2003 and to complete in 2007. Michigan and Georgia are
to follow a year later.
Modernisation: Conversion to carry up to 154 Tomahawk or Tactical Tomahawk
missiles by enabling seven cruise missiles to be fired from each of 22 of
the current 24 Trident missile tubes. Eight of these tubes are likely to
be interchangeable with Special Forces stowage canisters. The remaining
two tubes will be permanently configured for wet/dry launch of SEALs. The
combat system is also to be upgraded and future payloads are being
developed to augment the baseline configuration.
Structure: The size of the submarine is dictated primarily by the
24 missile tubes and the larger reactor plant to drive the ship. The
reactor has a nuclear core life of about 15 years between refuellings.
Diving depth is 244 m (800 ft). Kollmorgen Type 152 and Type 82
periscopes. Mk 19 Air Turbine Pump for torpedo discharge.

Description
Developed in 1997, the ASDS long-range submersible has been specifically
designed to deliver special operations forces for clandestine missions.
Compared to earlier SDVs (SEAL Delivery Vehicles), the ASDS offers
improved range, speed and payload. The design is specially engineered to
undergo safely the same shock loads as the parent submarine. The
electrically powered vehicle (it is equipped with 14 large high-energy
zinc-silver oxide batteries of higher density than previously, powering a
67 hp motor and four small, retractable electric side thrusters, two on
each side forward and aft) is manned by a crew of two and carries an eight
or 16-man SEAL team (depending on their equipment), together with its
mission-oriented specialised equipment. The batteries are housed in
individual titanium cylinders mounted outside its pressure hull. A
proposal has been made to replace the current batteries with a commercial
lithium ion polymer model. Lithium ion batteries, it is claimed, would
provide over 10 times the life cycle of the existing batteries. To meet
this need NAVSEA has awarded Northrop Grumman a contract to develop the
necessary technology.
The crew of two is accommodated in a forward compartment, while the SEAL
team is carried in an after compartment. A lock-in/out chamber separates
the two compartments and is also used to mate the vehicle to the parent
submarine. The underside hatch is designed to mate to `Los Angeles' and
six `Virginia' class submarines. The dry pressurised hull of the vehicle
is fitted with periscopes and communications antennas and forward HF and
side scan sonars.
The pressure hull is built of steel with bows and stern sections of
composite material.
The vehicle is controlled from an integrated control and display system
incorporating the primary control system, inertial navigation system
(identical to that in the F/A-18 strike fighter), sensors and
dual-redundant flight control computers and software. This equipment has
all been supplied by Draper Laboratories. The vehicle is fitted with two
masts - a non-hull-penetrating periscope to port and a communication mast
with GPS to starboard. Both hydraulically raised masts are retracted by
folding down into grooves atop the hull.
The vehicle is transported to the target area by specially configured
`Los Angeles' class submarines, where it will be carried on the after
casing of the boat. Alternatively, it can be carried by a C-5 or C-17
transport aircraft or in the well deck of an amphibious vessel.

Operational status
A detailed design and manufacturing development contract was awarded to
the Grumman Corporation in FY94 and the first of six ASDS vehicles on
order for the US Special Operations Command were delivered in mid-FY99,
trials being completed in 1999. The first unit completed its first
operational mission on 1 August 2002. Production of the second unit is due
to commence in late FY02. The USS Greeneville and USS Charlotte have been
modified to act as a test platform for the ASDS and multiple launch and
recovery sequences were conducted with the USS Greeneville in September
2002. Operational evaluation will be conducted in 2003. Four other `Los
Angeles' class submarines (Columbus, Charlotte, Hartford and Greeneville)
and the `Seawolf' class submarine Jimmy Carter will be equipped to operate
ASDS. Four 'Ohio' class boats which are to be converted into SSGNs, will
also be adapted to carry up to two ASDS each.