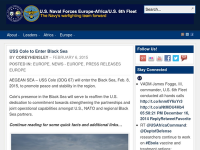 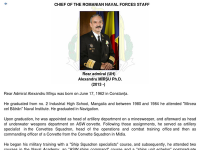 CHIEF OF THE ROMANIAN NAVAL FORCES STAFF Rear admiral (UH)   Alexandru MÎRŞU Ph.D. (2013 -)    Rear Admiral Alexandru Mîrşu was born on June 17, 1962 in Constanţa. He graduated from no. 2 Industrial High School, Mangalia and between 1980 and 1984 he attended "Mircea cel Bătrân" Naval Institute. He graduated in Navigation. Upon graduation, he was appointed as head of artillery department on a minesweeper, and afterward as head of underwater weapons department on ASW corvette. Following those assignments, he served as artillery specialist in the Corvettes Squadron, head of the operations and combat training office and then as commanding officer of a Corvette from the Corvette Squadron in Midia. // Дальше — www.navy.ro
Прикреплённые файлы: 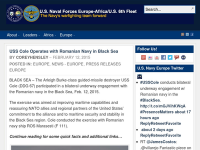