Alvin the submersible gets a makeover - The Boston Globe

The deep-diving submersible known as Alvin is finishing off a year-long retrofit that scientists say will allow the vessel to tackle what many consider the last frontier on Earth — the deepest parts of the ocean floor — and transmit its findings back in broadcast quality pictures and video. Shaped like a short, stubby submarine, the rebuilt vessel will bristle with high-resolution cameras outside, and have a mini-TV studio inside. Its three-inch thick titanium inner core will allow it to dive as deep as four miles, covering nearly all of the ocean floors around the world. // bostonglobe.com

Launched during the Space Age and overshadowed by missions to the moon, the deep-diving submersible known as Alvin has nonetheless racked up an impressive list of explorations over more than 40 years of plying the world’s oceans.

And now, after a year-long retrofit, Alvin is ready to tackle what many scientists consider the last frontier on earth — the deepest parts of the ocean floor — and transmit its findings back in broadcast-quality pictures and video.

The Woods Hole Oceanographic Institution is in the final stages of a $41 million overhaul and is readying Alvin for relaunch in April. Shaped like a short, stubby submarine, the rebuilt vessel will bristle with high-resolution cameras outside and have a mini-TV studio inside. Its 3-inch-thick titanium inner core will allow it to dive as deep as four miles, covering nearly all of the ocean floors around the world.

The original Alvin had a celebrated career. Its most famous exploration was in 1986, when it made 12 dives to the wreckage of the RMS Titanic in the North Atlantic. The pictures that scientist Robert Ballard and his colleagues took during their expeditions were a sensation.

‘Whatever you can print or put on TV, that’s the quality that will be available. And scientists will have much better control of what they’re looking at.’

Commissioned in 1964, Alvin was used two years later by its owner, the Navy, to locate an unexploded hydrogen bomb nearly 3,000 feet below sea level off the coast of Spain.

In 1977, it set off a new line of inquiry when Alvin’s explorers were the first to observe up close how a teeming ecosystem of clams and other organisms on the ocean bottoms survived on the chemical discharges of underwater hydrothermal vents and not from photosynthesis, as plants do.

Before being taken out of the water and brought to Woods Hole in 2011, Alvin was in the Gulf of Mexico, measuring the impact of the Deepwater Horizon oil spill on deep-sea corals.

But for all its successes in more than 4,600 dives, Alvin has been hobbled by its design and age. In 2004, engineers at the Woods Hole Oceanographic Institution, which operates the vessel, began working on improvements that will take Alvin even deeper, allowing scientists to make the most of their precious time in this little-understood ecosystem.

The original “personnel sphere,” which carries two scientists and one pilot, was designed so that each crew member looked out of separate windows, or view ports; none of the porthole-like windows had overlapping fields of view.

That meant the pilot could not necessarily see what the scientists singled out for investigation and had to guess where to navigate the vessel, or which samples of rock or ocean life to pluck out with Alvin’s robotic arm. And because it is so crammed inside, the scientists could not easily move into a position to look out the same viewing port as the pilot.

“It was incredibly frustrating,” Humphris said. “I never knew if the pilot got the right rock.”

Alvin’s new sphere was designed so the crew can collaborate better. It has five large windows that provide a 245-degree viewing field and are placed so the pilot and the scientists can focus on the same object simultaneously.

And the explorers inside Alvin­ won’t be the only ones enjoying the view.

The new sphere will have high-resolution cameras in multiple places: two on top of the sub that will record the terrain as Alvin moves; two at the “basket,” or front deck where samples are stored, to provide closer-in shots; and even more cameras on the manipulator arms that scientists can use to zoom in on an interesting shrimp, for example, or geological formation.

The scientists will see much more through the cameras, with greater ability to tilt and pan and with multiple screens to view images.

In the original Alvin, scientists took screen grabs from video for stills, which limited image quality. But Alvin’s new cameras will produce publication-quality photos or video.

“Whatever you can print or put on TV, that’s the quality that will be available,” said Kurt Uetz, the program manager for Alvin. “And scientists will have much better control of what they’re looking at.”

The challenge for Alvin’s scientists was getting all this high-tech equipment to survive the immense pressures of the deep-sea environment. The housings for the imaging and lighting equipment need to withstand about 10,000 pounds of pressure per square inch, Uetz said. Feeding the video back onto the ship required engineering special “penetrator plates” to get the fiber optics and other cabling through the three-inch walls of the titanium sphere.

The 41,000-pound titanium sphere can withstand the pressure down to 6,500 meters, or about four miles, allowing Alvin to cover 98 percent of the ocean floor around the world.

For now, Alvin will not be able to get that deep, kept back by lead-acid batteries that limit its dives to no more than eight hours. So in its initial relaunch, Alvin can dive to 4,500 meters, or nearly three miles, still deep enough to explore about two-thirds of the ocean bottom.

Uetz expects to replace the older power pack with lighter and more powerful batteries, such as lithium-ion batteries.

Although the new sphere will be slightly roomier inside, it will not be much more comfortable for the crews that take the rebuilt submersible down for a dive. The quarters will remain cramped and cold, and the retrofit skipped one important amenity: a bathroom. Crew members must either dehydrate the night before or use bags.

Deep-sea oceanographers are quick to note that more is known about the moon or the surface of Mars than the farthest corners of the ocean floor. In April 2012, filmmaker and explorer James Cameron traveled to the deepest part of the world’s oceans — the Mariana Trench in the Pacific, nearly seven miles underwater — in a specially made submersible.

“I felt like I literally, as if, in the space of one day, I had gone to another planet and come back,” Cameron said after the journey.

Soon, Alvin will be able to probe other deep, unexplored parts of the world’s oceans. Woods Hole scientists said the research they expect to gather from Alvin’s deeper dives

Scientists hope that exotic microbes and rare samples taken during the dives could yield clues for biomedicine and other novel natural products.

And although long in coming, the retrofit is expected to allow Alvin to continue to explore new underwater frontiers for another 40 years. 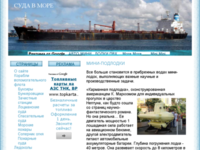 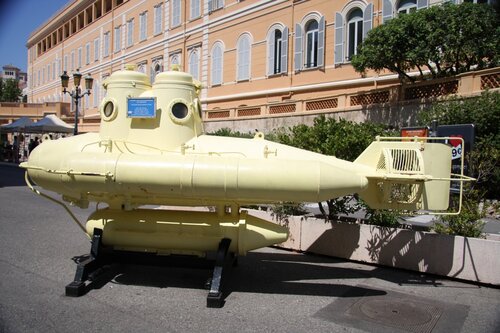 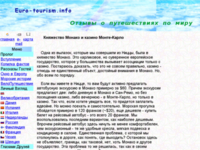 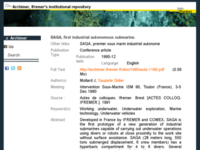 Developed in France by IFREMER and COMEX, SAGA is the first prototype of a new generation of industrial submarines capable of carrying out underwater operations using divers or robots at close... // archimer.ifremer.fr Now there is some serious Rolex coolness! // rolexblog.blogspot.ru