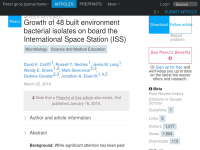 Background. While significant attention has been paid to the potential risk of pathogenic microbes aboard crewed spacecraft, the non-pathogenic microbes in these habitats have received less consideration. Preliminary work has demonstrated that the interior of the International Space Station (ISS) has a microbial community resembling those of built environments on Earth. Here we report the results of sending 48 bacterial strains, collected from built environments on Earth, for a growth experiment on the ISS. This project was a component of Project MERCCURI (Microbial Ecology Research Combining Citizen and University Researchers on ISS). Results. Of the 48 strains sent to the ISS, 45 of them showed similar growth in space and on Earth using a relative growth measurement adapted for microgravity. The vast majority of species tested in this experiment have also been found in culture-independent surveys of the ISS. Only one bacterial strain showed significantly different growth in space. Bacillus safensis JPL-MERTA-8-2 grew 60% better in space than on Earth. Conclusions. The majority of bacteria tested were not affected by conditions aboard the ISS in this experiment (e.g., microgravity, cosmic radiation). Further work on Bacillus safensis could lead to interesting insights on why this strain grew so much better in space. // peerj.com BEAM Installation Animation
Future astronauts will require highly reliable habitation systems to keep them healthy and productive during missions that take them farther from Earth than humans have ever gone before. Through public-private partnerships with U.S. industry, NASA is investigating habitation concepts that can support astronauts who are living and working in the harsh environment of deep space. Space Station 360: Columbus
Explore Europe’s Columbus space laboratory with your mobile phone or VR headset in this panorama. This 360° panorama lets you explore the International Space Station’s sixth module, Columbus. It was launched on 7 February 2008 on Space Shuttle Atlantis. The laboratory is ESA’s largest single contribution to the Station, and Europe’s first permanent research facility in space. [ISS] Timelapse of BEAM Inflatable Module Installation
A timelapse of the installation of the Bigelow Expandable Activity Module (BEAM) which occurred today, April 16th 2016. BEAM was successfully launched on a SpaceX Falcon 9 rocket and carried in the Dragon trunk on April 8th. BEAM is an experimental expandable space station module being developed by Bigelow Aerospace, under contract to NASA, for testing as a temporary module on the International Space Station (ISS) from 2016 to 2018
Expanding Possibilities Aboard The ISS
Eight days after its launch on the SpaceX Dragon cargo craft, the Bigelow Expandable Activity Module (BEAM) was installed on the aft berthing port of the Tranquility module April 16 for a two-year test of its systems. NASA is studying several habitat concepts to be used for future deep space exploration, and BEAM will be the first expandable habitat attached to station.

Space Station 360: Kibo
Explore Japan’s Kibo space laboratory with your mobile phone or VR headset in this panorama. This 360° panorama lets you explore the International Space Station’s seventh module, Kibo. It was launched in three parts in 2008 and 2009 aboard Space Shuttles Atlantis and Endeavour. The laboratory is renowned for its volume and extra features such as its external robotic arm, an airlock to send experiments outside, and an external facility to expose experiments to space. A bit of debris chipped the International Space Station. That’s just one piece of a much bigger problem.

A piece of debris just 1 cm across could cause serious damage – and space is full of our trash // www.washingtonpost.com