Something like this I would imagine.
Tested by Armadillo Aerospace in 2012. A balloon-parachute or ballute. I love portmanteaus. 😺 pic.twitter.com/GE4b4h3kcp

Hi @elonmusk
Look at what we found from @SpaceX on the foreshore of #Quemenes, the island where we livre in Brittany (France)! What is it ?
By the way will you send an electric tractor in space ? We need one ! 😉 #space #rocket #riddle #sea pic.twitter.com/7Uw3dQzOZ3 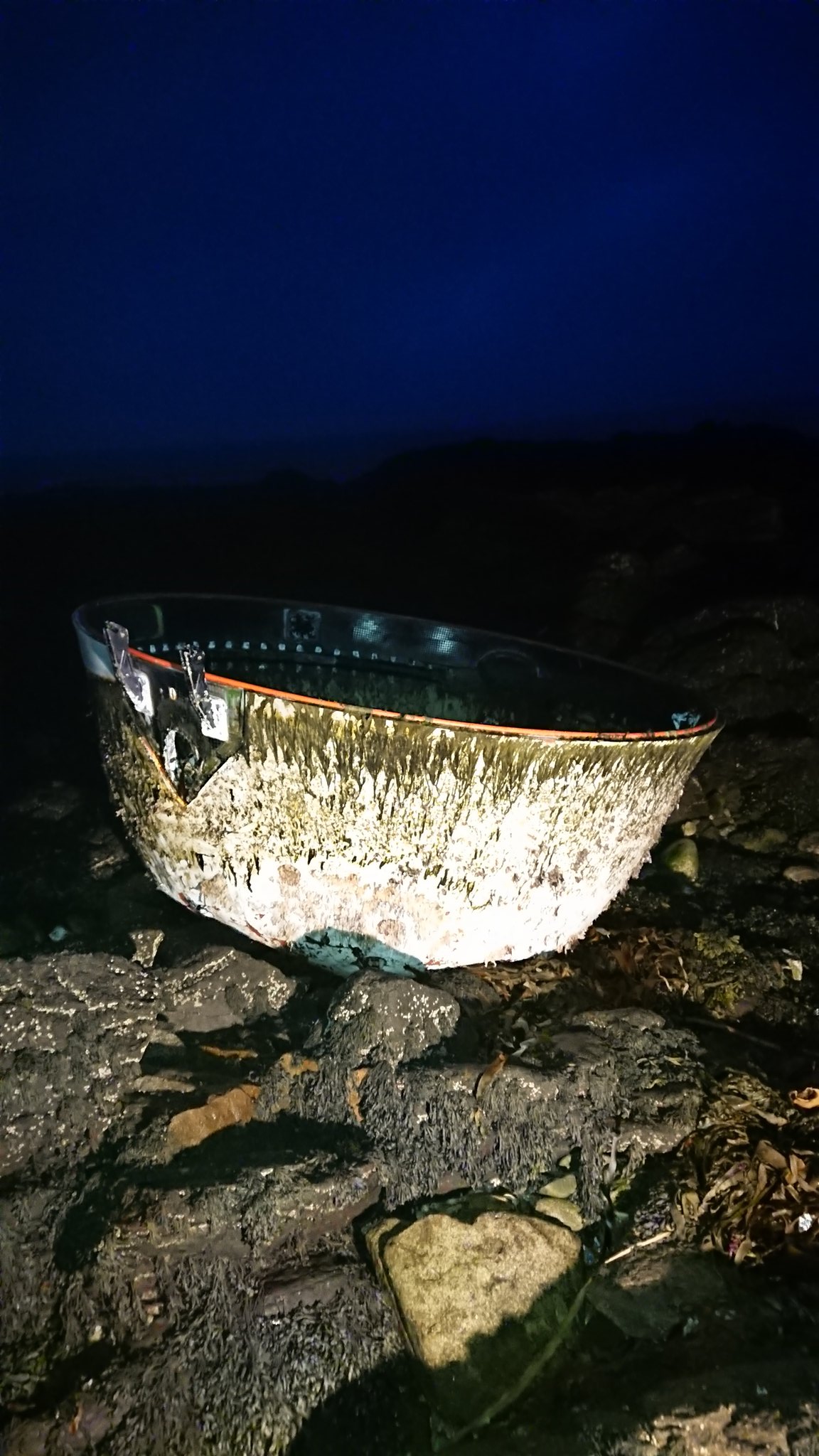 The president & COO of SpaceX Gwynne Shotwell gave a presentation about the Big Falcon Rocket (BFR) at TED 2018 conference. Here are some images of the rocket from her presentation. //  www.humanmars.net

SpaceX - Fairing Final Journey - TESS 04-25-2018
Could not take my eye off this fairing. Sorry if video is too long. Will probably never see this again. Congratulations to SpaceX for getting both fairings! This probably won't look good on a phone. We are a US disabled veteran run, non-profit video production company whose mission is to bring other disabled US Veterans to witness a launch, experience US Space History and become part of our report.

A new analysis finds that NASA will pay significantly more for commercial cargo delivery to the International Space Station in the 2020s rather than enjoying cost savings from maturing systems. According to a report by the space agency’s inspector general, Paul Martin, NASA will likely pay $400 million more for its second round of delivery contracts from 2020 to 2024 even though the agency will be moving six fewer tons of cargo. On a cost per kilogram basis, this represents a 14-percent increase. One of the main reasons for this increase, the report says, is a 50-percent increase in prices from SpaceX, which has thus far flown the bulk of missions for NASA’s commercial cargo program with its Dragon spacecraft and Falcon 9 rocket. //  Дальше — arstechnica.com

Wow, that's significant. The CRS-10 rendezvous abort was apparently caused by problems with @SpaceX's software. On the other hand, I sure hope the "improvements" OIG noted weren't structural - NASA's software dev process is a surreal nightmare in many cases (*cough* SLS *cough*) pic.twitter.com/IiFaeVa6tv

SpaceX Crew Dragon ships to the Cape in about 3 months

@elonmusk says that @SpaceX's Starlink internet constellation could start serving customers in three years, as early as 2021. This is a recalibration from initial service estimates of late 2019 or 2020 per SpaceX's Patricia Cooper.

I made a #Falcon9 Block 5 vs block 4 comparison shot, special thanks to @Craig_VG for merging @spiel2001's images. #spacex pic.twitter.com/KA3a3XLTsV

Concerns over astronauts&apos; safety hit a high point when, in September 2016, a SpaceX Falcon 9 rocket blew up while it was being fueled ahead of an engine test. //  www.chicagotribune.com

Wasn’t able to see the unloading of Dragon this morning, but look who has his beautiful net strung! #spacex #mrsteven pic.twitter.com/dW0DCDgVMP

SpaceX fans eager to watch the second launch of the company’s massive Falcon Heavy rocket should forget about witnessing a second spectacle in June and sit tight for a few more months. //  www.bloomberg.com

Brost: as early as the first half of next year we’ll start doing vertical takeoff and landing tests of our first BFR upper stage. #HumansToMars

I've gotten a lot of questions about this, so just to confirm: This is the first completely Block 5 Falcon 9. Stage 1 and Stage 2 are BOTH Block 5 iterations. #SpaceX #Bangabandhu #Bangladesh #Falcon9 #Block5 @NASASpaceflight

Stage 2 has the Block 5 engine today, but will operate like a Block 4 engine on this flight. #Falcon9 #Block5

"Goal is to be most reliable rocket ever built." - @elonmusk

From @elonmusk...
Goals with Block 5
- Really it's the 6th iteration of Falcon 9
- This will be last major version.
- There will be small improvements/minor changes from here for manufacturing and reusability.
- Up to 300 more flights of Falcon 9 Block 5 before retirement.

I means that won't throttle the 2nd stage engine to its maximum operational limit on this flight.

Musk: Now charging about $50 million for a flight-proven #Falcon9 booster, whereas older versions cost around $60 million.

SpaceX Chief Executive Elon Musk on May 10 went into detail on modifications made to the latest version of the Falcon 9, including redesigning a pressure vessel implicated in the rocket’s 2016 pre-launch explosion. //  spacenews.com

...
Musk said the COPVs now have a burst pressure “more than twice what they are actually loaded to on the pad.” SpaceX has a contingency design that would involve switching from high-strength carbon fiber with an aluminum liner to the superalloy Inconel, but that is “unlikely to be necessary,” Musk said.
...
Musk said the each of the nine Merlin engines used to power the Falcon 9’s first stage now have an 8 percent increase in thrust at sea level to 190,000 pounds-force. The single vacuum-optimized Merlin engine on Falcon 9’s second stage has a 5 percent thrust increase to 220,000 pounds-force, he said.

“In principle, we could refly Block 4 probably upwards of 10 times, but with a fair amount of work between each flight,” Musk said. “The key to Block 5 is that it’s designed to do 10 or more flights with no refurbishment between each flight. The only thing that needs to change is to reload propellant and fly again.”
With some refurbishment, a Block 5 first stage should be able to launch 100 times, Musk said.
In addition to greater reusability, SpaceX’s Block 5 Falcon 9 is designed to meet NASA commercial crew requirements and Air Force national security launch criteria. It’s also designed for easier manufacturing.
Musk said the Falcon 9’s octaweb structure, used to support all nine first stage engines and provide compartmentalization in case one or more fails, is now much stronger. The octaweb is made with bolted instead of welded aluminum and has greater thermal protection to prevent melting, he said.
SpaceX put latch mechanisms on the Falcon 9’s landing legs so the vehicle doesn’t have to rely on external clamps for steadying on ocean-platform landings, Musk said.

SpaceX also upgraded the rocket’s avionics, and is keeping the titanium grid fins, he said. The Falcon 9 previously used aluminum fins for steering the Falcon 9 first stage back to Earth, but SpaceX changed those on the Block 3 to titanium after the aluminum fins caught fire during reentry.

Musk said the rocket’s interstage features a hydrophobic thermal protection developed by SpaceX that is highly reusable and doesn’t require paint. Placed between the first and second stages of the rocket, which are painted white, the jet-black carbon fiber interstage harkens back to SpaceX’s first rocket, the Falcon 1.

“Obviously, aesthetics are a minor factor in rocket design, but I still like the fact that we’ve returned for nostalgic reasons to having a black interstage,” Musk said.
...
SpaceX engineers might squeeze another 2 percent of additional thrust out of the first stage, and another 5 percent out of the second stage as compared to the Block 4, he said. Musk said the rocket could see “minor improvements” for better manufacturability, reflight and reliability “provided that they are supported by our key customers in commercial satellite launch, NASA and the Air Force.”
He emphasized that any further changes would be small.

“There will not be a Block 6,” Musk said. “We intend to stabilize on the Block 5 platform and have no major upgrades.”